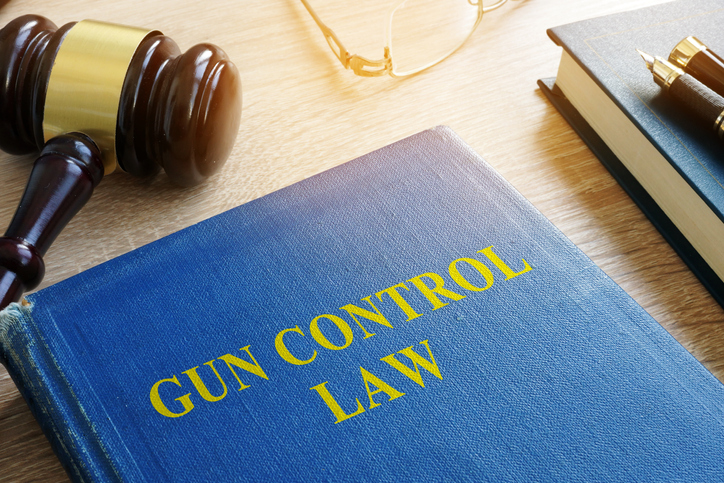 The New Gun Laws are here. What you need to know.

Gun control has been hotly debated for decades. But, increasingly, it seems that heat is turning up higher and higher every year. New gun laws are rapidly in the works in response to recent tragedies. Here's what you should pay attention to regarding the future of regulation and identity verification.

The Evolution of Gun Control in the U.S.

Before 1934, anyone from Baby Face Nelson to actual babies could buy machine guns during the "Tommy Guns era." During this time, there were no centrally-kept records of gun ownership.

With the passage of the National Firearms Act of 1934, the government began demanding higher tax payments for high-caliber firearms sales. Most consequentially, it also required manufacturers to register the sales of these weapons with the Secretary of State, including machine guns and saw-offs.

In 1968 the introduction of the Gun Control Act prohibited convicted felons, addicts, and the mentally disabled from purchasing firearms. Most notably, it greatly expanded the licensing requirements for gun dealers, requiring far more laborious record-keeping than ever before.

In 1986 civilian ownership of new machine guns was prohibited, though weapons manufactured before May 19th, 1986, weren't affected.

Since 1934 there have been drastic shifts in regulatory sentiment regarding gun laws. But perhaps the most significant reform within the last 40 years began with the 1981 assassination attempt on President Regan and the subsequent shooting -- and severe disablement -- of his press secretary, James Brady.

By 2012, over 150 million background checks had been performed under the Brady bill, resulting in almost a million denials of sale. In 2021 alone, the FBI conducted nearly 150,000 background checks, an increase in applications from 2020 by almost 45%.

Most reasonable people agree that the advancement of age & ID verification technology has solved many of the pain-points businesses and consumers used to suffer. But there's a double-edged sword in the revolutionary power of our modern-day verification tech.

For example, teens often order alcohol via delivery apps, easily sneaking by the app's verification requirements. One study suggested that almost half of all underage drinking in America occurs through the likes of DoorDash and UberEats.

Within the current US political and regulatory climate, it's vital to understand that a lot more heat is coming soon. There's a strong indication from DCDC that significant reforms to gun control loom large.

After weeks of debate

A bipartisan agreement came to fruition. The Senate passed the bill, 65-33, with 15 Republicans crossing party lines. The House approved the measure 234 to 193. On June 25, 2022, President Biden signed the gun bill into law.

What's in the bill?

The gun legislation will expand the background check system for prospective gun buyers under 21, giving authorities up to 10 business days to examine juvenile and mental health records. In addition, the bill sets aside millions of dollars for states to fund intervention programs, such as mental health and drug courts, and carry out so-called red flag laws that allow authorities to temporarily confiscate guns from anyone found by a judge dangerous to possess them.

In addition, the gun bill will give federal money to mental health resources in communities and schools across the country and set aside millions for school safety. The legislation also toughens laws against the trafficking of guns and "straw purchasing," the practice of buying a gun on behalf of someone barred from purchasing one.

For the first time, the latest gun bill includes not just married couples but serious or recent dating partners in a ban on domestic abusers buying firearms, tightening what is known as the "boyfriend loophole."

Why can't we all just get along?

Social tensions over gun control are incredibly fraught, and the culture war grows more partisan. However, the dilemma becomes further complicated the closer you look at it. Both sides of the issue -- pro and anti-gun -- can reference data to validate their positions. The picture is far from black-and-white, much more akin to a Jackson Pollock painting.

For instance, things get hazy when looking at the data. While gun violence is rising in America, there is an ongoing debate about a correlation between gun ownership and mass shootings. Indeed, some states with the highest levels of gun ownership haven't had a mass-shooting event in over four decades, including cowboy states like Montana and New Mexico. It's also undeniable that most mass shooters acquire their weapons legally. Yet, unfortunately, there don't appear to be any significant resolutions, either socially or legally, coming any time soon.

The bleeding edge of gun safety technology is the so-called "smart gun," a weapon its owner can only fire. The concept is similar to smartphone developers utilizing innovative locking tools like fingerprint scanning and Face ID.

Therefore, like a lost iPhone on a subway bench, a "smart gun" is rendered useless to children, criminals, and individuals at risk of self-harm. The technology uses biometric fingerprinting and RFID (radio frequency identification) chips, a time-tested approach involving an electrical-physical "handshake" between two separate transmitters.

Advances in online biometric and AI-powered identification technology don't occur within years--they happen in seasons. For example, face-scanning technology, like iPhone's Face ID, has advanced leaps and bounds since 2020 and the start of COVID.

With the ubiquity of mask-wearing, Apple shipped a version of Face ID that can now make an accurate, positive match of a user--with their nose and mouth covered.

Similarly, Meta's Instagram is currently testing a verification product that uses AIAI to analyze people's facial features to gauge their age. The social media goliath is concerned with quickly yet accurately determining if a potential new user is at least 13 years old (the minimum age allowed to use the app according to their TOS). A tiered system also blocks 13 to 17-year-old users from certain content and features.

The First and Second Amendment Walk into a Bar….

Not surprisingly, the idea of tech giants like Meta data mining the faces of teenagers raises many eyebrows. However, the company's response is reasonable--there are never any personal data like name or location attached to the minor's biometric inputs. And once verified, the researchers immediately delete the visual data while presumably strengthening the efficacy of its machine learning product.

With increasingly age-restricted products being verified biometrically, there will undoubtedly be advances in applications that improve the age and ID verification for gun sales. But again, this proverbial sword is double-edged; the more seamless and painless the process becomes, the easier it is for bad actors to exploit.

Age and ID Verification with BlueCheck

BlueCheck achieves this balance by combining a sleek, field-tested user interface with a robust verification engine that connects to a network of authoritative databases and credit bureaus. In addition, we partner with companies in various industries and growth stages to provide affordable, reliable online age and ID verification. Learn more about how BlueCheck can help you solve your age verification challenges.

Sources in order of appearance: